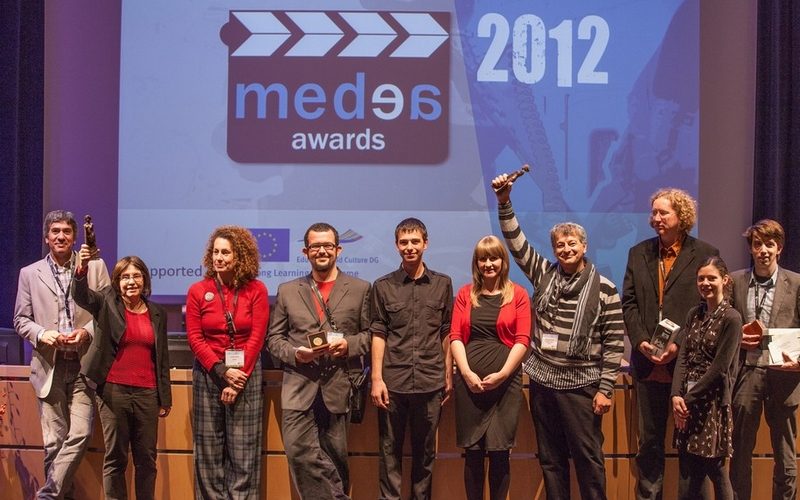 In 2012 the competition attracted 213 entries from 32 countries. Those entering could choose between submitting their entry as a production made by a professional company or semi-professional production unit or as one made by individual teachers, students, learners, parents, professors, supporting staff or institutions in all educational levels or training centres. The finalists were chosen by a jury made up of 90 education and media experts from 30 countries who evaluated the MEDEA entries in late September and early October. Presentations by all 9 finalists were given during the Media & Learning Conference 2012 which attracted 282 participants from 41 countries and which provided an important context for this year’s MEDEA Awards. The conference agenda furthermore included workshops led by previous finalists of the MEDEA Awards.

Quand la colère fait tomber les masques was made by Université Paris 1 in France and is a 35 minute movie with a gripping story of a social conflict between an employee and the new management of a family-owned company in the process of becoming a large multinational. And the Oscar goes to … was made by the 5th Primary School of Alexandroupolis in Greece and incorporates the way storytelling is used in movies in everyday teaching practice for subjects such as language learning, mathematics, social and science studies, art, English, ICT, as well as for learning attitudes like how to handle bullying.

Speaking at the awards, Mathy Vanbuel, Chairperson of the MEDEA Awards Committee highlighted the fact that both winners have a really strong narrative element which highlights the importance of storytelling for learning. “Narration is increasingly used to capture interest in the learning context, it is a way to keep learners motivated, to encourage them to press forward and to take a real interest in what is going on through their concern for what is happening to the characters in the stories that we tell. Everyone loves a good story, and nowhere is this more evident than in the MEDEA Awards this year.”

This year the European Collaboration Award was awarded to Historiana – Your Portal to the Past made by EUROCLIO – European Association of History Educators, The Netherlands. Historiana is designed primarily for students (from age 14), and their educators (including trainee teachers) and is conceived as being a complementary educational resource for history, heritage and citizenship education in Europe and beyond. The prize for Educational Media Encouraging Active Ageing, set up to coincide with the European Year of Active Aging and Solidarity between Generations was won by All that Jazz made by Fundación Universidad Carlos III, Spain. All that Jazz is the media part of a lifelong learning course which uses multiple media: video, audio, face to face classes, presentations, DVD, as well as a class blog.

Two additional prizes were awarded, the first, the Special Jury Prize was given to Flying Start made by the University of Leeds, UK. This entry is built around a generic core content that introduces a range of academic skills throughout the 4 week period between the students receiving ‘A’ levels and starting at university. It was given this prize in recognition of the excellence of the underlying design. Schoolovision made by schools all over Europe were the popular winner of the audience favourite prize.

The other finalists who took part in the ceremony were: Il Girotondo del Tempo made by Hyperfilm srl, Italy; Moving Image Techniques made by Christina dePian, Greece; and SignMedia made by the University of Wolverhampton, UK.